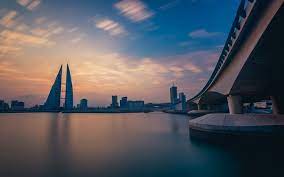 During the third quarter of 2021, the main product exported from Bahrain were the unwrought aluminium alloys with 320 million BD,